More than the worst thing we have ever done

“You have to wash! Look at you! I’ll tell the school matron to beat you if you don’t wash!” Kenneth’s mum scolds him, inspecting his uniform and behind his ears. Its visiting day at Gulu Primary Boarding school.

Its true, Kenneth is looking a bit grubby. But he isn’t roaming the streets stealing and setting fire to grass-thatched huts. And in front of us sits a little report card full of top marks, indicating he is currently placed 4th out of over a hundred students in his class.

While his Mum is over-fixated on his messy appearance, she brought him a soda and his favorite meal: fish and rice. I brought a big box of biscuits and bananas. In the shade of a red flowering tree, he reads to us from an English story book, perfectly. As always, he is quiet. But he is smiling a lot. It’s a beautiful day, in lots of ways.

For those who haven’t heard this story, about a year ago, we woke up to find our grass-thatched hut roof ablaze with fire. When I screamed, neighbors came sprinting with basins and jerrycans of water (no taps, no hoses!). Miraculously, Lacor fire truck arrived quickly to further douse the flames. Within an hour, it was all over and we were left amongst our sodden, ashy but intact home feeling shocked but grateful. Our initial suspicion turned out to be correct: this was the work of an 11-year-old neighborhood kid, Kenneth.

Why? Kenneth’s mother and our close neighbor Lucy were caught up in a complicated family feud to which we were completely oblivious. Two weeks prior, we found smoke billowing out of Lucy’s window, and discovered her bed, piled with her possessions, blazing. At the time Lucy (who has sickle cell disease) was on oxygen in hospital. So it was us who confusedly marched the culprit, wee Kenneth, to the police. After this we were added to his enemy list. Two weeks later again, our roof was burning 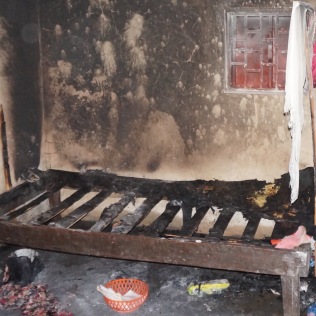 (above: Lucy and Nick, Lucy’s bed after the first fire).

By the day of his hearing in court, we’d made up our minds. Drop the charges, bring him back home. My friend Christo a councilor, agreed I could bring Kenneth once a week for sessions. He joined our afterschool phonics class for neighboring kids. Nick’s parents generously offered to sponsor Kenneth to go to boarding school, which served the double purpose of removing him from a chaotic, harmful home environment and getting him back in school. Kenneth slowly started to unfurl, the depth of his eyes slowly started to wake up.

We are not heroes.

The risk in this story is that we make ourselves the heroes. The white saviours who found the black miscreant child a sponsor to school and become his patrons.

Please allow me to dissolve the hero narrative for you:

Now that we’ve cleared that up, this story has two major points.

A group of friends sat around on a lazy summer night, drinking wine and eating cheese. Out of the blue, a guy with a gun appears, highly agitated, demanding cash and threatening to shoot. Except no on had any money. What do you do?  In that moment, one of the cheese-eaters offers the guy a glass of wine. And the script gets flipped. They humanize him, he takes the wine. They all drink, talk, eventually he leaves.

It’s a true story, check it out on Invisibilia podcast. Offering wine to your gun wielding assailant is an example of non-complementary behavior, which is essentially responding to hatred/violence with an opposite approach, such as kindness. Again and again, life shows us that non-complementary behavior can ‘flip the script,’ and transform relationships. I believe this concept was first coined by Jesus… ‘love your enemies.’

The most awesome story in this episode is about a small Danish town’s approach to terrorism prevention. Police noticed a pattern of missing young men- 34 guys who left for Syria, responding to a call by ISIS to come build the Islamic State. They didn’t close their borders, declare those who left ‘enemies of the state,’ or make arrests upon their return. Instead, when they came back they invited them to have tea. They help them to enroll in courses, find jobs, find accommodation, even get medical treatment for bullet wounds. Most importantly, they offered them a mentor, and made sure they felt like they belonged in Denmark. It worked. Incredibly, the returnees they invited came, as did over 300 other ‘potential radicals.’

Whether it’s in the realm of personal interactions or national policy, the Jesus-logic ‘love your enemies’ actually works on a deep-principle-of-the-universe level. Surprisingly often, the guy with the gun picks up the wine glass and the kid who lit your roof on fire becomes a regular visitor, and wannabe-terrorists decide they would rather be proud Danish citizens. Obviously it doesn’t always go that way. But respond with love and it becomes a possibility, and you will expose hatred for what it is and at least contain its spread. Match the antagonism and you step into the cycle of escalation, retaliation and alienation. The last couple of decades of American foreign policy makes that pretty clear.

Point 2: “Each of us are more than the worst thing we have ever done”

Stevenson describes a man in his last few hours before execution who came to him and said, ‘this has been such as strange day. All day, guards asked me how they could help me, what meals I would like, whether I needed stamps to send last letters.’ The man continued, “more people have said, ‘What can I do to help you?’ in the last 14 hours of my life than ever did in the first 19 years.” Bryan wrote, “All I could think was…Where were they when you were 3 years old being abused? … Where were they when you were a teenager and you were homeless and struggling with drug addiction?”

When I first met Kenneth, people told me he was bad news, a hopeless criminal. When I visited him in the remand home, I started to piece together his story. He was born in a time of war. After his father died, he was expelled from home whenever his mother’s mental health tipped over the edge. His brothers taught him to steal to survive. Slowly, the real Kenneth is emerging. He is super intelligent, inquisitive, shy, but warm.

Each of us are more than the worst thing we have ever done.

Jesus specialized in this. When a corrupt official, a tax collector for the romans climbed a tree to get a better view of Jesus passing, he visited the man at his home. The man turned his life upside down to join Jesus’s movement and paid back all the people he had cheated double. When Jesus saw a group about to stone a woman for cheating on her husband, he challenged them, ‘let the one who has never done anything wrong throw the first stone.’ They left, and he stayed to talk to her. Jesus engaged with the people everyone else despised or ignored, he understood their full story, and reclaimed their humanity. Prostitutes, self-righteous religious leaders, the poorest of the poor, the sick, prisoners.

I’d like to share that Kenneth just finished reading his very first chapter book. It was Fantastic Mr. Fox. He devoured it in one day, and actually understood it. Here in Uganda, that’s a miracle. We are going to watch the movie together when school breaks for holidays next week. Imagine if he was still in Gulu’s youth prison and we all missed out on all this life.