Is it too much to hope for? Can the poorest region of the globe escape the worst?

What’s happening right now in Sub-Saharan Africa is nothing short of astounding. We have porous borders, poor healthcare systems and people packed together in chaotic cities and informal settlements. By conventional wisdom, it’s a recipe for infectious disease disaster and you’d expect coronavirus would slam the region.

Sub-Saharan Africa is the least affected region of the planet. By a long way. About a billion people live here. On Saturday 11th of April only 509 cases were reported across the entire region in 24 hours.

Including Russia, there’s about a billion people in Europe as well. On the same day East Africa reported 5 deaths, Europe reported 3143 new deaths. Sub-Saharan Africa is doing very, very well. Or so it seems. There’s a couple of obvious rebuttals to this apparent success story, which I’ll deal with with before I move on.

Isn’t it still early in the outbreak?
Yes, but this doesn’t explain the low numbers. At the same stage of the outbreak in Europe, countries did not have huge case numbers, but most countries saw case growth rapidly increase. Over the last 10 days in Sub-Saharan Africa, not only have countries been spared exponential growth, we have not seen significant growth at all! The number of daily cases for most countries is a flat line. Below I’ve graphed cases per day for the four Sub-saharan African countries with the highest total number of coronavirus cases, plus Kenya from East Africa  to really prove the point. I haven’t even included countries the raft of countries where nothing much is happening, like Uganda which had only two positive cases in the last 7 days! 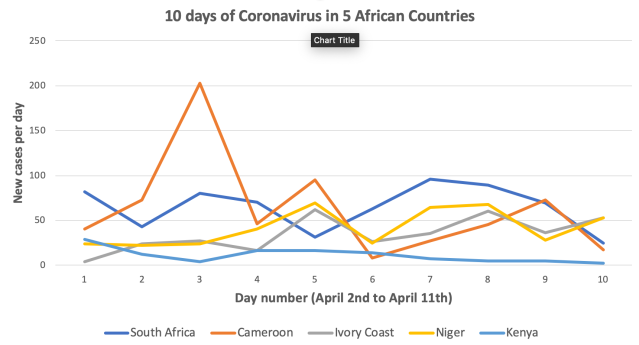 Looking back a month at South Africa, the country with the most cases and the most advanced outbreak, they appeared just on the cusp of exponential growth before….. flatlining. Incredible. Wonderful!

So why is Sub-Saharan Africa doing so well?

Over a month ago on the 6th of March I predicted that coronavirus “would not devastate Uganda” My three reasons were Uganda’s young population, a rural population, and a history of avoiding flu outbreaks. Of these three reasons the young population and rural population are currently irrelevant, because coronavirus hasn’t spread enough for us to know whether our young population will lead to low mortality (no-one has died yet in Uganda!) or whether coronavirus will spread less to rural areas.  My historical observation was the unexplained phenomenon that neither SARS nor H1N1 swine flu touched Uganda, which bodes well. None of these observations however even begin to explain the tiny number of cases reported across the region.

So what could it be? Why so few cases?

Is it the weather?
There is evidence that hot weather reduces spread , but this alone doesn’t explain the lack of cases. In other hot countries like Malaysia and Brazil, coronavirus is spreading far more quickly than any African country, although still not as rapidly as in Europe. Also there are regions such as Johannesburg in South Africa where the temperature isn’t exceeding the mid 20s, yet those areas aren’t seeing large numbers of cases. We can’t praise hot weather alone!

Genetics?
Significant genetic protection from the virus seems unlikely given the high infection and mortality rates among African Americans. That population hasn’t been in America long enough (a few hundred years) for their genetic code to be significantly different from (mostly) the population of West Africans where they originally came from.

Immunity?
Could it be that exposure to many pathogens, or malaria, or some other specific disease leads to increased coronavirus immunity? This has been suggested, but there is zero evidence to back it up. I hesitate to even suggest theories with zero evidence, especially this one which has been doing the fake news circuit but we know so little that I’m clutching at straws.

Harsh lockdowns?
Restrictions on movement and gatherings are not the secret to Sub-Saharan Africa’s success. Restrictions here just can’t bring about the same degree of social distancing possible in richer countries. Families are packed together in small houses. People can’t afford to stockpile food so have to interact with sellers every day. Corruption and laxity at borders is rife.

In Uganda 13 people with coronavirus passed through the airport without being stopped, and went back to their communities. Some of them went to the market and  used public transport before they were advised to self-quarantine. As far as we know so far, those 13 only infected three people, all family members! If this kind of breach happened in a European country, it would have lead to hundreds or even thousands of infections.

I’m sorry I’ve come with observations and not answers, but I don’t have any.

So not only do we not know why coronavirus isn’t bad, I haven’t heard any great theories. Hopefully soon someone will come up with better ideas, although there are obviously more pressing matters in other parts of the world at the moment.

Before finishing, I want to make clear that the virus is taking a heavy toll in a different way. The effects of Lockdowns in Sub-Saharan Africa have already killed thousands of people, and continue to kill many more every day. These lockdowns have caused crippling economic and healthcare system breakdown, with wage workers struggling for food and sick patients unable to reach hospital. In Uganda lockdowns are almost certainly going to kill far more people than the virus will, and tragically perhaps more people than the virus would have killed even if there had never been a lockdown. I plan to write about this in more detail soon.

Make no mistake, Some countries in Sub-Saharan Africa will probably have outbreaks that will kill a lot of people. We may well be far from seeing the worst of Coronavirus here. But that aside, right now the coronavirus situation is more positive than any epidemiologist, doctor or even layperson could have imagined.

May the Sub-Saharan miracle continue.

14 Responses to A Sub-Saharan African Miracle?