All Doctors in the Ugandan Public sector laid down their stethoscopes a week ago, and there is no end in sight. Their demands are off the charts.

“A senior consultant doctor or professor will be the highest paid health worker, with a gross salary of Shs 48 million, a five-bedroom house, 4000cc vehicle and three domestic workers.”

This seems insane. They are asking for 12x their current pay, and a whole lot of other perks. To locals here though, it makes some sense, and with just a bit of digging we get a great insight into 3 major issues. Inequality, cultural expectations and the ridiculous political situation in Uganda.

Poverty is bad – inequality might be even worse. First the inequality between rich countries like New Zealand and Uganda. New Zealand’s GDP is over 60 times that of Uganda. Senior New Zealand doctors earn more than 10 times their Ugandan colleagues. Unfair right! Yes…… but not as unfair as the situation within Uganda itself.

Earning 1000 US dollars a month, senior Doctors in Uganda already earn 20 times more than the average Ugandan. In New Zealand, Senior doctors only earn 3 times the average person, which I think is brilliant. Senior Ugandan doctors are demanding a 1200% salary increase. $12,000 a month. $150,000 a year. Yes that’s right, they want 12 times their current salary. They would then earn more than a senior New Zealand doctor. Absurd! Should doctors in one of the poorest countries on earth, earn more than doctors in one of the richest? 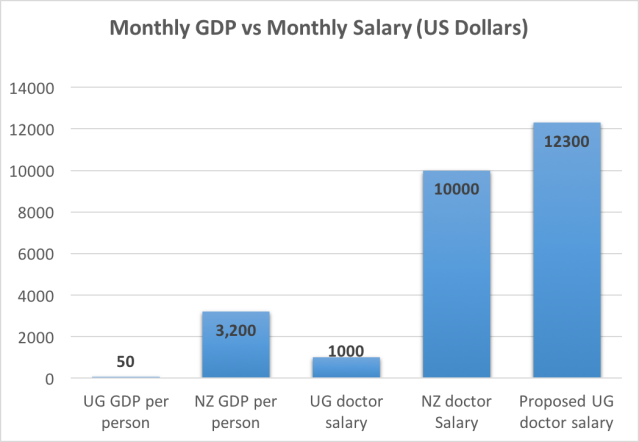 This would mean a Ugandan doctor would earn 250 times the current Ugandan GDP. Effectively this means that 250 poor farmers would earn the same as only one doctor. Isn’t that horrific! Unfortunately this is the trend around the world. Salaries increase while the poor aren’t much better off.

In Uganda, even more than in western countries ‘Big people’ are expected to display their status through lavish living and big things. There are a lot of expectations on ‘big people’ here, and this helps makes sense of the obscene extras demanded “…a five-bedroom house, 4000cc vehicle and three domestic workers.”

Big job = Huge house (5 bedrooms!)
If you’re a Big Senior Doctor in Uganda, you’ll need a 5 bedroom house. First so everyone can see you have the biggest house in the neighbourhood, and second so you can support all 20 your family members who expect to live with you for free because you’re a doctor.

Big job = Huge car (4000cc)
Google image search “4000cc vehicle” and see the huge 4WD cars that every big doctor clearly needs. A doctor isn’t a real doctor until they look down on you from the windscreen of their Range Rover! Status and heirachy are the name of the game, illustrated by the biggest doctors (senior ones) getting a 4000cc 4WD, while ‘medium’ doctors get a more modest, 2500cc car. Perhaps a corolla?

This cultural norm makes me quite sad, as environmental concerns become irrelevant, and good health goes out the door as soon as you earn decent money. You’ll never see anyone with a high salaried job here on a bicycle, even if work is just down the road. Its culturally inappropriate just not the done thing. Junior doctors riding the public buses complain to me that other passengers deride them. “Get out of the bus. Why aren’t you driving your own car? You’re a doctor!”

Big job = 3 domestic workers (Women running around doing everything for you)
It may seem unfathomable that one person should ask for 3 domestic workers. Remember though that the workers aren’t just to look after them, but also their 20 family members who will insist on living in their huge house. Nothing demonstrates  status and opulence like having a gardener carefully prune every bush, one maid cooking and the third washing your clothes.

President Museveni has been the big boss boy for longer than I’ve been alive. Nearly 32 years. The huge issue at the moment is him becoming Mr. President-For-Life, by scrapping the presidential age limit (75 years). As much as many people don’t like Donald Trump, at least the longest he can be there is 8 years! To help secure this life presidency, Museveni handed out an official bribe of 8000 US dollars so that every one of the 431 Ugandan MPs to hold “consultative meetings” in their district.

Many people, including the health minister herself believe this official bribe triggered the strike. Maybe a salary of 200,000 dollars a year is fair enough, when MPs already earn about that much. Many people are asking the question. Why should a poorly educated MP who is driving their country into the abyss, earn more than a highly qualified doctor who is saving lives?