“These officers….” Anthony, my fellow ‘observer’ of the operation raised an eyebrow and sighed as we watched 20 police and 15 municipal enforcement officers wander, aimlessly and timidly along the busy wholesale street they were supposed to be raiding to impound illegal alcohol. The head of the operation was no where to be seen.

“Come on, they aren’t really checking these shops.” I led the way into a dimly lit, densely packed store. Armed with a cell-phone torch, a quick peep behind the counter revealed a jackpot. Somewhat relieved to be given a clear instruction, officers removed the illegal products. Having instigated at least a little action, we headed off to target another shop.

What felt like just moments later, I heard shouting and looked over my shoulder to see a growing crowd swarming. We rushed back over to find an irate shop owner standing over the pile of confiscated products yelling into his cell phone. At his feet were boxes of plastic sachets of spirits. There were also some plastic bottles and small glass bottles of spirits. The head of the operation and other officers stood nearby, looking uncertain and nervously requesting the shop keeper to calm down.

Then the Mayor arrived. Obviously at the shop keepers summons. He proudly strutted in, crowd parting to allow him to take center stage to start pontificating. Struggling to get close enough to hear what he was saying, I caught phrases like “unfair targeting of municipal businessmen,” and “now they want to take your glass bottles,” and “defend Gulu’s economic interests.” Each sentence got cheers from the surrounding shop owners, presumably his new private supporters. On my phone, I tried in vein to convince a higher power (i.e. the District chairman) to come and intervene. Then the rain started, and the police officers cowered further under the shop eaves. Operation aborted. The officers scuttled back into the vehicle, the shopkeeper packed his goods back inside, and everyone left.

As unjust and illegal as the Mayor’s actions had been, I realize we had made a critical mistake. The target of the law was the cheapest, nastiest spirits in plastic sachets and bottles. There are, however, some glass bottles of 200ml, which are also now technically against the law, which has a minimum packaging size limit of 250ml. The police weren’t wrong to try to impound the smaller glass bottles. But the language of our movement has focused on plastic packaging, and so the Mayor felt justified to come running to “defend” the business owners. Had we made it clear to the police that they should stick to confiscating plastic bottles and sachets, we might not have been thwarted.

I kicked myself. The worst news came some time later. Indignant, and possibly also receiving financial inducements, the Mayor decided to completely block the municipal enforcement officers from taking part in operations. Because the police required the presence of local government (because, they say it’s a local government ordinance), I was sure this would block all further enforcement. Eventually, it was decided between all parties that we would collectively “overlook” the glass bottle issue and focus 100% on plastics. I visited the Mayor personally to try and smooth things over, assure him that glass bottles would no longer be targeted. Let me just say that his response was such that for the first time, I lost my temper to a ‘VIP’ official and walked out of his office.

Next time I saw him, there was plenty of media with us.

P.S  For those confused about these different products: 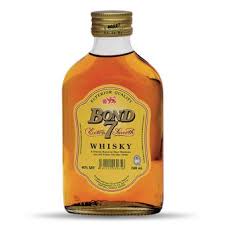