Here are our 8 favourite movies that both help us learn about injustices in the world, and inspire us to change them. These movies are great to watch as a group, so you can discuss the issue both during and after the movie.

These films had to meet 3 criteria
1. There’s a clear issue, or injustice brought to light in the movie
2. One or more people in the movie are fighting the injustice.
3. Movie not documentary.

In no particular order…

1. Pride – Worker’s right/discrimination
Feel good all the way home. A true, unlikely, heartwarming story where the LGBT community bands together to help miners during their strike.
Con: A bit light and fluffy

2. Lincoln – Slavery
Daniel Day Lewis’ Oscar winning performance as the force behind abolition of slavery in America. Shines light on the mechanics of changemaking. Collaboration vs. Fight. Pragmatism vs Idealism. How low are you willing to go to get the job done?
Con: Dialogue heavy and a little slow. Similar to ‘Ghandi’. Epics are sometimes like that.

3. Made in Dagenham – Women’s rights
True story about a factory worker who took on big business and government to fight for equal pay with men for women throughout England. Lots of fun moments, also believable and hard-hitting.
Con: Perhaps a little bit predictable, but then it is a true story

4. Blood Diamond – Diamond trade
Leonardo cranks out a ‘quality’ Zimbabwe accent in this super Hollywood flick. He’s not the hero though that’s for sure. You’ll never look at your diamond ring the same way again.
Con: The script could have been better. Cheesy and unbelievable at times. 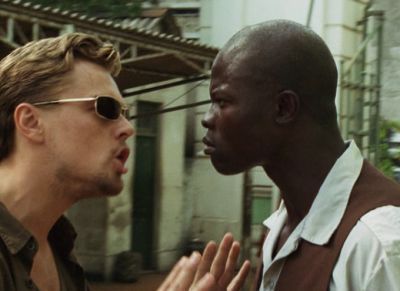 5. Spotlight – Sexual abuse in the Catholic Church
An intelligent depiction of a true story about journalists who made a difference. Made me want to be a journalist. For about 5 minutes. Won Oscar for best film 2 years ago.
Con: A little bit dry. Zero action, comedy and romance. Nothing explodes. Tessa says those are pros.

6. Lord of War – Small Arms trade
Action packed Hollywood blockbuster with yours truly Nicholas Cage. Tells the story of the disastrous small arms trade, where rich countries profit from poor country’s wars. You’ll be hooked after the fantastic first scene. This movie is underrated, and I love it a little too much.
Con: Isn’t really that good a movie. Still its my favourite.

7. Ghandi – Colonial Oppression
Quality 8 Oscar winning epic about the man who organized people like no other, to drive the British out of India.
Con: You’ll need to forgive that a white guy plays Ghandi. They weren’t even thinking about that back in 1982! Make a lot of popcorn, Its over 3 hours long.

8. The Help – Racial injustice
You can’t lose with this one. A product of their love and care, ‘Emma Stone’ bands together with African American house workers to expose their mistreatment by white housewives to the world. Lots of laughs, lots of tears.
Con: Some criticise its “white saviour” narrative. I’ve seen worse

Bonus 9th: Selma – Racial Equality (Thanks Caleb)
Martin Luther King’s story needs no introduction. The Selma March is one of the most incredible events of our time, and if you’re not from America, you may find it hard to believe that it could even happen.
Con: Its not the best quality movie ever. More people should make movies about this story!

Feel free to add your own suggestions. We’d love to watch some changemaking movies we’ve never heard of.

9 Responses to The 8 best Changemaker movies