Now its about Acholi pride: The Show Down

On Saturday morning my phone buzzed, early. “The Ministry of trade are coming on Monday.” Coming to make our councillors halt the alcohol ordinance. The snake show-down. I leapt out of bed with a rush of adrenaline. Good-bye sleep in, good-bye weekend.

For the next 60 hours, I got to feel like a ‘real’ community organizer, constantly on the phone saying things like, “So Pastor, you are Councillor Simon’s friend? Think you can influence his vote on Monday?” and “how many people can you bring with you to the council hall?” The tactic was two fold. 1) Fill the the council hall with as many community members and prominent religious, cultural and political leaders as possible, and 2) create pressure on each of the councillors to use their vote to defend the ordinance. Those councillors got a lot of phone calls in the following 48 hours. Despite all the efforts, on Sunday night we were still nervous. There were still rumors of bribes floating around.

On Monday, Wakonye Kenwa members were the first ones there: 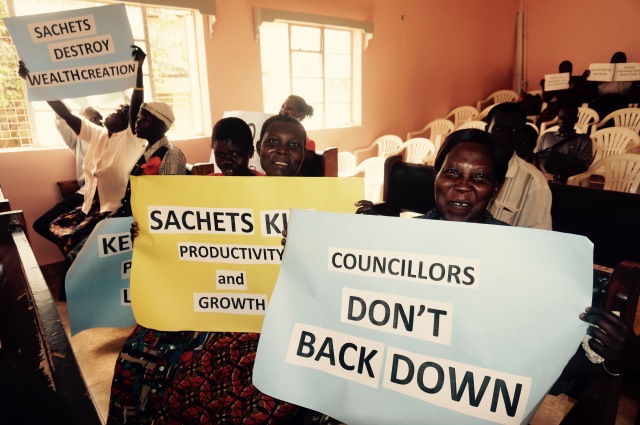 By 10am on Monday morning, the council hall was absolutely packed. The mood was excited and defiant, as the clip on on national TV captured. Every time a prominent Acholi personality entered there were cheers and waving of placards. Our group had made our own signs, messages for the councillors like “Leaders, don’t back down” and messages targeted at NRM (the ruling party) based on their own slogans like”Wealth Creation” and “Productivity and Growth.” Others had written their own edgier ones. My favorite: “Ministry of Trouble, Indecency and Corruption” (instead of trade, industry and cooperatives).

I was disappointed Minister Amelia didn’t come in person. Her representative spoke at length, using as many long words as possible. His main point seemed to be “we are sailing in the same direction” but that Gulu needed to wait. He claimed Gulu was breaking Uganda’s agreement with the World Trade Organization (Technical Barriers to Trade, Articles 2 and 3), because Gulu was not giving ‘time’ for companies to adjust their packaging.

One after another, the councilors responded. They spoke about how important the ordinance was to Gulu District. They challenged the Ministry’s motivations for interfering, and why there was no need for Gulu to ‘wait,’ noting all the times the Ministry had blocked national efforts for alcohol law reform. My favorite response was a councilor smoking the Ministry’s WTO defense by pointing out that all of the sachet alcohol trade is within Uganda, not between countries (and therefore has nothing to do WTO agreements).

A tipping point reached when Norbert Mao showed up, a much loved Acholi (regime opposition) politician of iconic-hero like proportions. Whose name makes him sound like some kind of epic Chinese dragon. A councillor moved a motion that a sample of sachet alcohol be presented to the Ministry’s representative ‘for tasting.’ The speaker emotionally declared that ‘normal procedures’ for a full council meeting would not be followed, and invited all the ‘VIPS’ to speak- Bishops, Shieks, traditional chiefs, and of course, Mao. They spoke about how Acholis had suffered for decades of war. Years of fear, violence and oppression led to heavy drinking patterns. Alcohol companies exploit this. The Ministry wants to protect these companies to maintain their profit at the expense of Acholi people. How dare these people from Kampala tell Gulu to get rid of their law? The debate took on new dimensions. This was a matter of Acholi pride, protection of Acholi people. 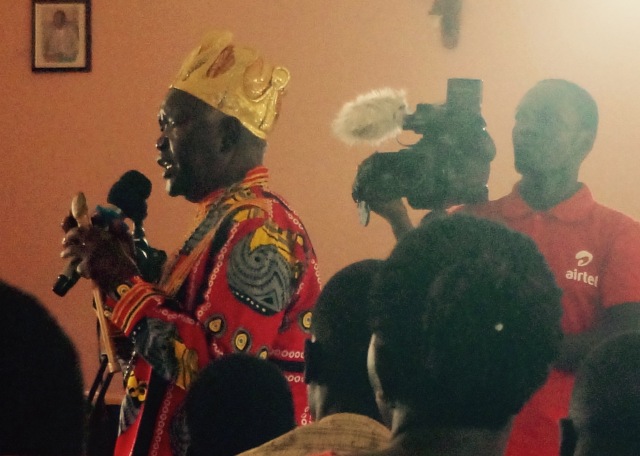 In the aftermath of that Monday, there was a collective sense of triumph and unity. While I’d questioned the Chairman (Owl’s) wisdom in allowing the meeting to take place, I believe it achieved something quite profound.

All the local media stations covered the story, and so did the national paper, The Daily Monitor. Norbert Mao wrote an opinion article featured in the Sunday monitor titled “Gulu trailblazing ordinance should be supported”One online media outlet even ran a piece about how the Speaker turned down millions of shillings of bribe money to protect the Ordinance. I took him a clipping and some photos. He was stoked. When a Ugandan politician is proud of turning down a bribe, that is something to celebrate.

2 Responses to Now its about Acholi pride: The Show Down

Leave a Reply to Les and Angela Brighton Cancel reply