The night before the big public launch of our alcohol law, I biked down Juba road, ticking off tasks in my head, moving past the road-side dusk activity, maize roasting, weaving motorbikes. Official speakers ready to talk, tick. Donation of bottled water from local company delivered, tick. Ready to meet the tent people at 6:30am tomorrow, tick. Truck envoy passes on route to South Sudan, patient’s relatives scuttle across the busy road to the hospital with flasks of hot tea. Banner ready, tick. Ring the religious leaders, when I get home. Deep breath.

I turn off the main road to meet Wakonye Kenwa members to finalize how to transport our group of 38 to town for the march. Cut through the narrow gap between half a skinned cow hanging outside the butchers and the ‘Somali hotel’, down the dusty path, past the thatched huts and the ducks.

I jump off my bike to face a row of deeply discontented, accusatory faces. “So there will be no T-shirts?” The tone was serious. Not like the light, teasing requests I had brushed off during the last 2 weeks. I deflated like a punctured balloon. This, again. There was even more frustration after the event.

When I first heard people (not just our group members) talking about needing printed T-shirts to be part of a march, I assumed that people just wanted a free clothing item. I mean, who doesn’t love a nice over-sized T-shirt printed with an out of date event slogan? I have several such excellent T-shirts I like to sleep in. Its simply a classic case of hand-out mentality, I thought. I’ve since discovered there is a bit more to it.

Here is my best attempt to outline the conflict:

My thoughts: (You can imagine my frustrated, incredulous tone) 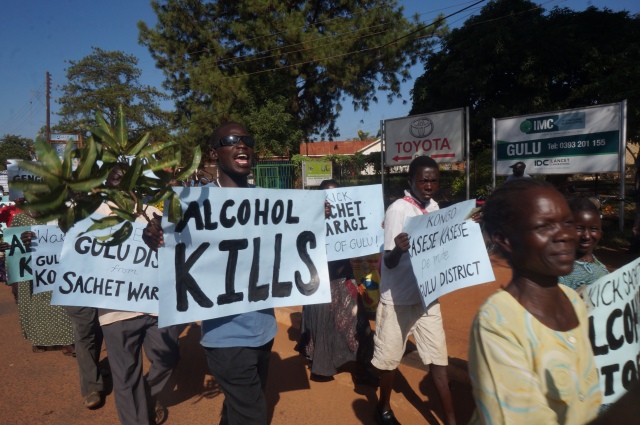 Our group marched, without T-shirts. It was a great day. They starred in a drama about alcohol, which everybody agreed was the highlight of the event. We’ve been on local radio many times speaking about this issue, the work we’ve done, putting our group’s name out there. But there are still high levels of discontentment. There are conversations to be had, and it will probably take a while. I want to make sure the group feels valued, and proud of their achievements. Maybe we should just get the group some damn T-shirts.

But there is a bigger, interesting point here. Are NGOs appropriating activism in Gulu, and elsewhere where they work? By ‘facilitating’ the voice of the people, do NGOs make people believe that they can’t be activists without donor money, allowances and handouts? There is a huge gap in Uganda between the kind of public dissent that results in tear gas and arrests, and NGO funded ‘advocacy’ events. Today in Gulu there was a march for road safety. Last week there was a march to celebrate human rights day. Lots of money spent, happy people in T-shirts, but (I suspect) no actual measurable goals, no tangible change. Most marches in Gulu, I’ve learnt, mean nothing.

My prayer is that one day in Gulu, I will actually have to go and buy myself some pajamas, because the time of the giant NGO t-shirt has finally passed.