Back in New Zealand over the summer, I remember proudly boasting that our community organizing group was ploughing ahead without me. That’s supposed to be the test, right? To start something that takes on an energy of its own, driven by motivated local leadership? Our chairperson reported that the group had successfully pushed the Chinese road company to add speed bumps outside our local hospital where trucks sped by on their way to Juba, occasionally crushing the odd patient or hospital staff. Thousands of kilometers away, I glowed with pride.

I arrived back in Uganda, congratulations ready on my lips. Sure enough, there were the speed humps. But every time I bumped into our members:

Angee: “Its been so long since we’ve met!”,
Florence: “No one ever called me to a meeting,”
Omona: “Is Wakonye Kenwa over?”

Group money had been spent by just one person. I’m still not sure if the speed humps would have happened anyway. Lack of action had festered into discontent. There was a resurgence of demands for things we’d previously operated happily without. Why not have snacks and drinks at meetings? Couldn’t we get more funding? What about an ‘allowance’ for this, or that?

While these questions only came from a few members, I felt waves of doubt. Had any of it been real last year? Had our members truly been fighting for change, or were they hanging around hoping the personal benefits would start flowing? When I thought about the sacrifice of personal time and the passion I’d seen, I do believe many of our members want to be change makers. That doesn’t mean many wouldn’t also happily receive a benefit here or there! But the real point was that our structures fell apart when I was away. That thing called ‘ownership’ wasn’t strong enough. We needed to try something new.

So heres what we’ve done.  Last year we had one big group with members from all over this map. We met once a month at church to discuss our one big issue and action plan. Now we’ve divided up into 5 village based groups: 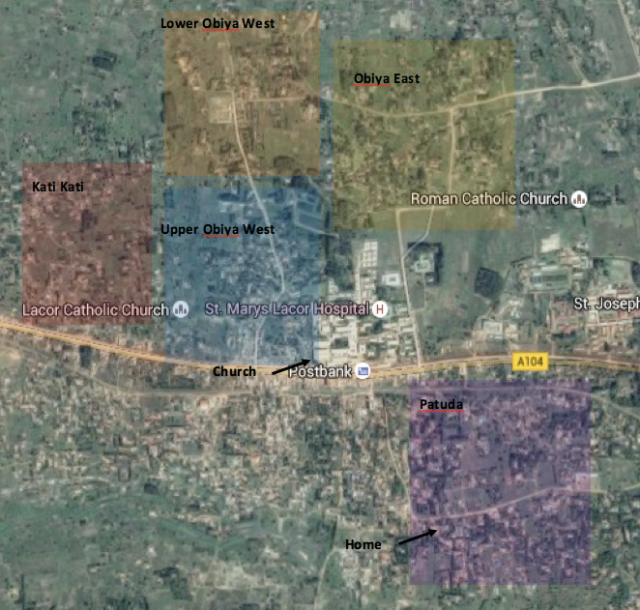 Geography In a largely vehicle-less community its incredible the difference that a few hundred meters makes. Our groups now meet frequently in each other’s nearby homes to plan their next steps to solve a local problem. This has already resulted in:

Simplified leadership Instead of our old classic Ugandan ‘executive committee’ with many positions with vague responsibilities, each village group has elected a single key leader who calls their members to meetings, guides discussion and coordinates actions. The key points:

My emotional detachment from success This is a funny one. Let me try and explain. When Wakonye Kenwa was working on just one big issue at a time (e.g. the alcohol sachet ban law), it was all too easy for me to feel like the validity of my presence in Gulu was tied to the objective success of our group’s work. It was all too tempting for me to take too much control. Accordingly, I’d do way too much for the group to try and ensure results. Its possible to know the real point is to grow a community’s ability to create change and still fear lack of tangible results.

Ideally I’d be wise/strong/balanced enough to not need results for my own validation whatever our group structure (!)  But I guess I’m a work in progress. Now we have five new issues to tackle, its certainly easier for me to emotionally detach from the success of any one of the group’s projects. By stepping back, each group has room to struggle, experience failure and learn. I can agitate, challenge, ask critical questions, even offer advice or new ideas. But if the group doesn’t act, nothing will happen. I have to be OK with that. Anything else defeats the entire purpose. Its up to them.

These new changes are just that- new. Time will tell if we have a new recipe for local ownership, or at least, a few more crucial ingredients.